Cloudy water in the aquarium

Cloudy water in the aquarium

Aquarium fish are one of the most popular pets. A well-maintained mature aquarium is an effective decoration for the interior. Observing a piece of nature in your home has many benefits. However, most aquarium owners will agree that maintaining optimal water quality in an aquarium is challenging, especially in a new fish tank. What causes cloudy water and what is the best way to deal with it? 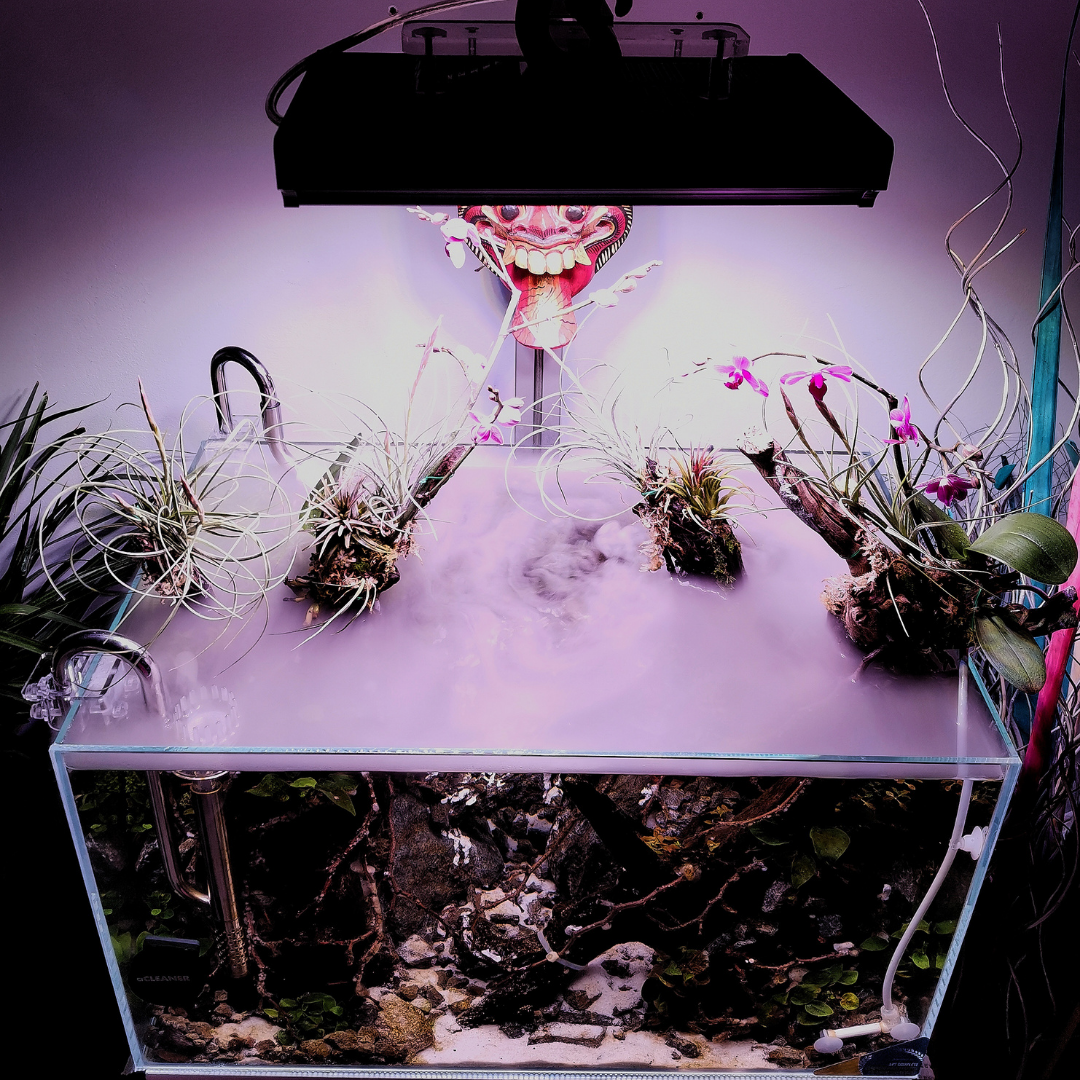 Aquariums are artificially maintained micro aquatic environments in which various biochemical processes take place. Not visible to the naked eye, there are millions of microscopic organisms. Some are good but some are also bad and can make the fish tank water cloudy. In order to be able to control them, we must understand how to find a balance. Very often, due to lack of knowledge, aquarists make mistakes, which result in diseases and the death of the stock.

Most aquarium livestock, such as fish and crustaceans, breathe oxygen, which is dissolved in the water. In this process, they also absorb other substances and chemicals that are in the water. That is why its water quality is so important. The most common sign of an issue with your aquarium is cloudy water and an unpleasant smell.

In the case of aquarium water, the most important thing is to maintain a healthy colony of good bacteria. Even in the ocean, there is never crystal clear water. Each body of water has a bacterial flora that protects animals against dangerous algae and protozoa in the aquarium by consuming nitrates and other unwanted waste products produced by the fish.

A brand new , a cloudy fish tank may mean that the optimal living conditions for the fish have not yet developed. This means that the nitrogen cycle hasn't finished yet. In such a situation, it is worth waiting a few days for beneficial bacteria to appear in the new aquarium. The good bacteria ensure the balance in the aquatic environment. This cycling process usually lasts about 3-4 weeks. The nitrogen cycle is the most common cause of cloudy water in the new aquarium. Read more about the role of ammonia and nitrites, beneficial bacteria and the aquarium ecosystem in our BLOG!

Milky water in the aquarium can also appear after the water change. Carrying out this too often, as well as sterilizing the filter media, is contributing to the destruction of the biological balance. Consequently, it becomes impossible to clean the established tank naturally. In this way, an ideal environment is created for the living and multiplication of protozoa in the aquarium.

In particular, wood that is badly prepared or too fresh. Also, artificial decorations on which debris accumulate can cause the water to become cloudy. Read more about how to choose proper decorations to your aquarium in our recent blog!

Improper substrate may be the site of putrefactive processes. Then the tank water becomes darker, tea-like.

Feeding animals too often or in too much amounts. The uneaten food should be treaded as fish waste. Excess waste in the tank means bad water quality. It is worth reducing the amount or frequency of feeding, especially if a slightly floating sediment is noticeable at the bottom.

Dirt in the tank

Too much pollution in the aquarium can cause cloudy water. The neglect of desludging of the substrate contributes to this.

-lack of or insufficient water changes,

There are many reasons why you can combat cloudy water in your aquarium. How to improve the water quality? 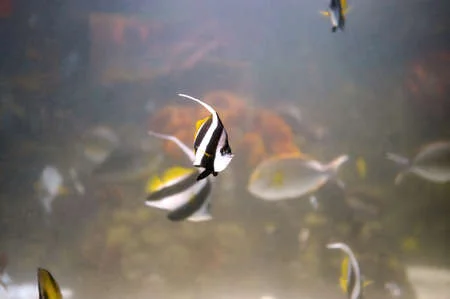 Time of adding fish to the new aquarium

Fish should only be introduced into the mature tank with working filter. As mentioned before, 2-4 weeks should pass from flooding the aquarium to stocking it.

Water change in the tank

The water in the established aquarium should be changed regularly every week, in an amount from 20 to 40%. Learn how to perform efficient regular water change of the aquarium water with our BLOG!

Filtration system in the tank

The aquarium filter should be adapted to the tank size. Filter cartridges should be rinsed in aquarium water so as not to destroy good bacteria. You should also remember that the filter should be turned on 24 hours a day. To support the filter work, think of introducing some species from the cleaning crew. Otos, Amano shrimp or Black molly are awesome in doing this job. Moreover they'll surely help you to combat the algae growth and have crystal clear water.

When performing the water changes, remember to desludge the bottom from gravel or coarse sand. This treatment is not performed in case of using commercial organic substrate.
In turn, aquarists who have an aquarium lined with fine sand should replace it with one with a grain diameter of 2-4 mm. It is also worth knowing that the substrate should not reach higher than about 5-7 cm.

Excess food can be also the cause of cloudy water in the fish tank. Adult fish should be fed once or twice a day and the food should be eaten within s few minutes. However, once a week it is worth doing a fast and not feeding the fish.

Regular checks should be made to ensure that decorations such as roots, bark and pieces of wood do not rot. If so, they must be discarded immediately. Ceramics also does not harm the fish if it does not have sharp edges. However, dirt accumulates on such ornaments, which is liked by various bacteria. It is also worth removing decaying plants on an ongoing basis.

Green water in the aquarium

The water color in the tank may also turn brown or green. The brown color is caused by a cloudy substrate. In this case, collect and remove the top layer of the substrate, and then change the water. It is worth using a filtering wool cartridge in the filter.

The bloom of unicellular algae is responsible for the green water color. Green, cloudy tank water can also be caused by:

-too strong and long lighting of the aquarium,

-placing the aquarium too close to the window and direct sunlight, supporting the algae growth

-too rare or too small aquarium water changes.

More algae, as well as protozoa, may appear in an immature aquarium deficient in nitrifying bacteria. As the tank water matures, aeration is very important as the algae take up a lot of oxygen so there can be not enough oxygen levels for fish.

To combat the problem of green water in the aquarium, it is also worth turning off the light or reducing the lighting time. Usually this will be enough for about 3 days. After this time, the problem should disappear. You should also place the tank away from the window and change the tank water, take care of efficient biological filtration. Cartridges to eliminate floating algae growth can also be used in the filter.

Special preparations, including a particularly powerful skimmer, can be effective for green, cloudy water. With heavy blooms, it is worth using an ozone generator. In its absence, you can use a large dose of activated carbon with an active water flow. It's also a good idea to lower the water to 79 degrees Fahrenheit.

It occurs when there are undissolved tiny particles in the tank water, but too small to stay on the filter sponge. In turn, the constant movement of the water makes it cloudy. Usually this problem occurs in new fish tanks where, for example, the new gravel has not been rinsed well.

In this case, you can replace all the tank water, but this requires a lot of time. Therefore, it is better to insert a special cartridge made of dense wool into the filter. It will catch floating particles. You can also partially change the water until it becomes clear.

How to avoid cloudy water in the fish tank?

First of all, you should not introduce new fish into an immature tank. This always leads to problems and can even kill stocking. The water becomes cloudy with the growth of aerobic bacteria, which causes the amount of oxygen to drop. In this way, they deprive the fish of the chance to breathe freely when the water is silted up.

Water tested with aquarium tests will let you know what you are dealing with and when to introduce the fish. After checking water parameters such as NH4 and NO2, it is possible to know when the filter has been touched and when you can start with adding fish.

To find out if you have too many fish in your fish tank, check NO3. As much as the test shows nitrogen compounds, you can have as many fish.

In most cases, the aquarium water is cloudy because of the natural causes, so it's best to get rid of them by natural methods. It is also worth performing regular water changes and examining the water parameters in order to keep your fish happy and healthy. They will surely reward you as a great decoration in the form of a well-maintained aquarium.